The Ground-Work of Stile: The Quotations in Johnson’s Dictionary 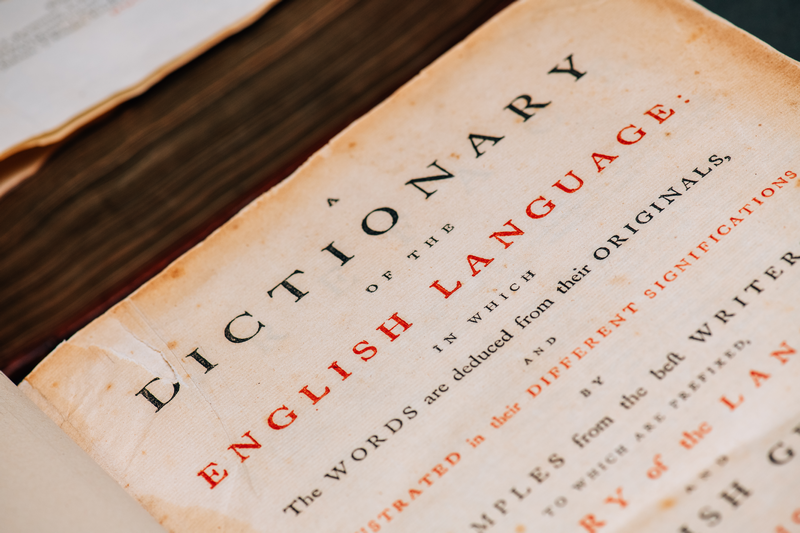 Newcomers to Johnson’s Dictionary are often surprised when they open it. Only a small fraction of the words on any page are Johnson’s: the bulk of it is quotations from others, around 115,000 of them. These quotations are the heart of Johnson’s Dictionary. They are the key to how he created his book and the source of authority for all his definitions.

Though there had been English dictionaries for a century and a half before Johnson, we know almost nothing about how they were compiled. Johnson’s, though, gives us firsthand evidence about the process. He began not with a list of words but with English literature itself: he drew on his years of wide reading and his prodigious memory, and spent years reading and rereading great works in English. When he came across an example of a word that might be useful, he underscored that word in pencil, wrote its initial letter in the margin, and drew vertical lines at the beginning and the end of each passage he wanted to include. When he reached the end of each book he would hand it to one of his assistants—we know of at least six “amanuenses,” paid to copy and organize the materials—who would then transcribe the passages onto slips of paper. Johnson arranged those slips in alphabetical order by the words he wanted to illustrate, and for each word he worked to divide them into distinct senses.

Johnson was not the first lexicographer to use quotations from literature, but he was the first in English to do it on anything like his scale, and he used them to map the territory of the English language itself. For Johnson, words are words because they’ve been used by others. Words have the meanings they do because others have used them that way. It is not for the lexicographer to declare what a word means. Good lexicographers, he writes, “do not form, but register the language; [they] do not teach men how they should think, but relate how they have hitherto expressed their thoughts.” He could not, of course, capture every variety of the language. He admits he is limiting himself to writing: collecting the spoken language simply wasn’t feasible. Though he sometimes mentions words limited to a regional dialect, the jargon of a single profession, or one social class, his preferred standard is educated and literary. By the standards of eighteenth-century linguistic theory, he was still remarkably forward-thinking. The Académie française made up its examples of usage, and if the great French authors of the past disagreed, the great French authors of the past were wrong. Not so for Johnson: words gained their meaning from their use, and no dictionary maker had the authority to veto the people who used words in ways he didn’t like.

Johnson saw his mission in almost nationalistic terms. He was, after all, trying to produce an English rival to the great national dictionaries of the European academies, and he believed English literature was the equal of French and Italian. As he puts it in his preface,

In hope of giving longevity to that which its own nature forbids to be immortal, I have devoted this book, the labour of years, to the honour of my country, that we may no longer yield the palm of philology without a contest to the nations of the continent. The chief glory of every people arises from its authours.


The sources of his quotations tell us much about how Johnson understood the his language and his nation. Though he was proudly English and took a wicked pleasure in ridiculing Scots in conversation, for instance, the authors he quotes are from across the British Isles, including writers from Scotland (John Arbuthnot, James Thomson), Wales (John Davies, John Dyer), and Ireland (Robert Boyle, Jonathan Swift). In other respects he was more limited. His list of authors is close to 100 percent male, all too typical of eighteenth-century canons, though a few exceptions show he was not actively excluding women. Hester Mulso (later Chapone) and Elizabeth Carter both contributed to his great essay series, The Rambler (1750–52); he recognizes them by quoting Mulso under quatrain and Carter under proportion. Jane Barker’s Love Intrigues; or, The History of the Amours of Bosvil and Galesia (1713) is cited under life. In speaking to friends Johnson praised Charlotte Lennox, author of The Female Quixote, as one of the most learned women of the age, and he quotes her eight times. Jane Collier’s Art of Ingeniously Tormenting makes it in twice.

Nothing too modern would do: he believed that “our ancient volumes” should be “the ground-work of stile.” He therefore “studiously endeavoured to collect examples and authorities from the writers before the restoration [of the monarch in 1660], whose works I regard as the wells of English undefiled, as the pure sources of genuine diction.” But he didn’t want to look too far back:

But as every language has a time of rudeness antecedent to perfection, as well as of false refinement and declension, I have been cautious lest my zeal for antiquity might drive me into times too remote, and croud my book with words now no longer understood. I have fixed Sidney’s work for the boundary, beyond which I make few excursions.


Sir Philip Sidney began writing late in the 1570s, in Queen Elizabeth’s reign. Elizabethan and early Jacobean English, from the late sixteenth to the early seventeenth century, held a particular attraction for him:


From the authours which rose in the time of Elizabeth, a speech might be formed adequate to all the purposes of use and elegance. If the language of theology were extracted from Hooker and the [King James] translation of the Bible; the terms of natural knowledge from Bacon; the phrases of policy, war, and navigation from Raleigh; the dialect of poetry and fiction from Spenser and Sidney; and the diction of common life from Shakespeare, few ideas would be lost to mankind, for want of English words, in which they might be expressed.


Major writers who came later, John Dryden, Jonathan Swift, and Alexander Pope, are very well represented, and for scientific and technical words he looked to recent works. Sometimes he quotes friends who were still alive when the Dictionary appeared, as when Samuel Richardson’s Clarissa illustrates chuffily and dishabille, and on a few dozen occasions he even quotes himself, with or without attribution. And he sometimes looked back as far as the fourteenth century (Chaucer illustrates words including dam, donjon, erke, quaint, and welkin). But his preferred canon is the writers who flourished between about 1580 and 1660.

Scholars have argued for generations over whether the quotations tell us anything about Johnson’s intellectual or political allegiances. He gives us good reason to think he was sometimes being ideological. “I might have quoted Hobbes as an authority in language,” he said in conversation, “but I scorned, sir, to quote him at all; because I did not like his principles.” David Hume, another philosopher he despised, is likewise excluded from the Dictionary. And while John Milton’s Paradise Lost is among the most quoted works in the entire book, Milton’s prose—where his republican politics and heterodox religious opinions are on display—is barely touched.

But the list of authors is hardly eccentric, and he covers the literary canon as people of his day understood it. Some writers appear less than their modern literary reputations might suggest. Christopher Marlowe, for instance, is a major figure today, but he is almost absent from the Dictionary: a quotation from “The Passionate Shepherd to His Love” appears under girdle n.s. 1, but Johnson incorrectly attributes the poem to Shakespeare. William Langland’s Piers Plowman and the anonymous Sir Gawain and the Green Knight, now ranked among the greatest works of medieval literature, are passed over entirely. But Marlowe was in low repute in the eighteenth century, Langland was known only to specialists, and Sir Gawain wasn’t known at all. Johnson was in the critical mainstream of his day.

Many of his favorite authors are literary giants: Edmund Spenser, Shakespeare, Ben Jonson, Milton, Dryden, Swift, Pope. Not all the most quoted names, though, are quite so familiar. Isaac Watts, a poet and hymn writer, and the theologian Robert South appear many hundreds of times each. Minor figures like Ambrose Philips, Edward Moore, playwrights Henry Brooke and Thomas Southerne, the translator of Homer George Chapman, the earl of Roscommon, Thomas Carew, epic poet Sir Richard Blackmore, Elijah Fenton, and James Bramston number in the hundreds, and he returned to some of them at the end of his career, writing their biographies for his Lives of the Poets. Other names are familiar to us but not as literary figures. Sir Isaac Newton, for instance, is quoted for words including gravity, lens, light, parallax, prism, rainbow, refraction, and vision. John Ayliffe supplied him with legal terms, Thomas Tusser was a good source of agricultural words, and John Locke provided the philosophical vocabulary. He had favorite authors to illustrate the botanical, nautical, theological, mechanical, diplomatic, and commercial words.

What about the words he couldn’t find in his great trawl through literature? Though he used his reading program to generate his word list and his examples, he checked his work against other dictionaries, especially Bailey’s, and occasionally found words he had missed. He observes one embarrassing near-disaster: “Many of the most common and cursory words have been inserted with little illustration, because in gathering the authorities, I forbore to copy those which I thought likely to occur whenever they were wanted. It is remarkable that, in reviewing my collection, I found the word Sea unexemplified.” That was clearly a mistake, one he had to rectify by looking for examples of the word sea in literature. But he never encountered some words in his reading because they’ve never been used. When he admitted such words to his book he followed the definitions not with an author’s name but “D.” or “Dict.,” meaning he found them only in other dictionaries. He didn’t like relying on anyone else’s authority, and included these words hesitantly: “Of such I have omitted many, because I had never read them; and many I have inserted, because they may perhaps exist, though they have escaped my notice: they are, however, to be yet considered as resting only upon the credit of former dictionaries.”

This shows the degree to which the quotations are the basis for everything he was doing in his dictionary. They provided him with his word list; they gave him the evidence for the different senses; they instructed him on what words meant. His job as a lexicographer is not to tell the world which words were legitimate and which meanings were proper. It was to listen to the great authors of the past—authors who were the equal of the great writers of Europe, using a language that was as good as French or Italian—and to tell the word how they used the language in their own words.