This website gives you three different ways to look through Johnson’s Dictionary.


Select the method you wish to use from the "Dictionary" menu in the top toolbar: 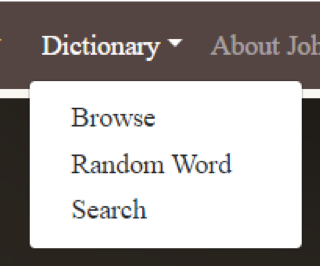 Dictionary menu with options for searching.

The “Browse” function displays full-page facsimile images of the printed dictionary. To browse the dictionary, choose “Browse” from the “Dictionary” menu in the top toolbar. The title page of the dictionary will display.

From here, you can use the pull-down menus to select a section and a page. Click "Page>" and "<Page" to page forward or backward within each section. Click "Section>>" or "<<Section" to navigate to the following or previous section.

These eighteenth-century alphabet conventions affect the alphabetical order of words within these sections. For more information about alphabetical order in the printed dictionary, see the Guide to Dictionary (available from the User Guides menu in the top margin).

The letter X has only one entry that appears at the bottom of the last page of W. This online edition combines WX into one section.

All the random words you have viewed will appear in the results list until you navigate away from the page.

On the homepage, enter the headword you want to look for in the search box. A "headword" is a word that Johnson defined. Press the magnifying glass icon to start your search.

When you click the magnifying glass icon on the homepage, or when you choose "Search" from the Dictionary menu at the top of the screen, you will move to a screen that provides many more options for searching and displaying your search results.

The pull-down list next to the search bar lets you restrict your search to particular parts of the entry. All of these options accept the * wildcard and regular expressions (regex) except “Foreign” and “Headword sounds like.” 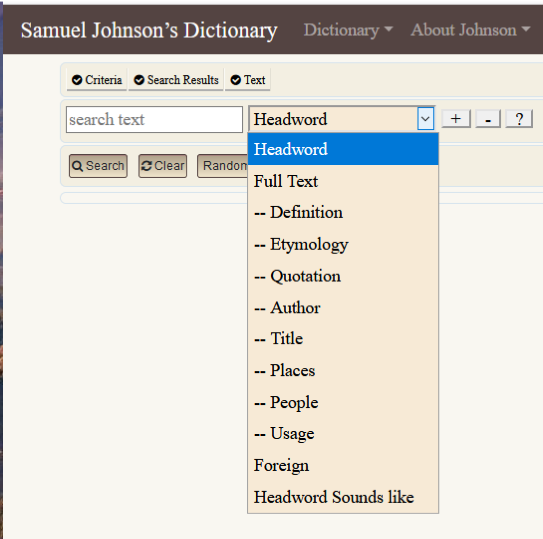 You can search for your term in:

You can use two different wildcards to search the dictionary, but not in the same search box:

* replaces any number of characters

* is a wildcard that represents any number of letters

*apl* finds words that have the letters apl anywhere in the word (apluster, chaplet, staple ...)

. is a wildcard that stands for a single letter


If you are searching for a phrasal headword, or for a word that includes punctuation, use the * wildcard. For example, cuckoo* brings up cuckoo, cuckoo-bud, and cuckoo-spittle, and hippocrates* brings up Hippocrates’s sleeve. These wildcards cannot be combined in a single search field, but you can combine them by using the + button to add additional search criteria (see below). In addition to wildcards, the search fields accept regular expressions (regex) that allow you to specify search patterns in more detail. If you wish to learn about regex, you can find tutorials and “cheat sheets” on the internet. The Headwords field uses regex for mySQL; other fields use regex for Lucene. Because Lucene’s patterns are always anchored, we treat all Headword queries as anchored (beginning with ^ and ending with $) so that queries work similarly no matter which field you’re searching.

No. None of the searches are case-sensitive.

The + and - buttons allow you to add/remove additional criteria to narrow or broaden your search. Every time you press the + button, a new row opens up for you to enter a new search term. Pressing the - button removes the row.

And Or pull-down menu.

If you choose OR, the search will retrieve all results that match either one term or the other term. For example, if you search for words that Johnson considered “ludicrous” OR that contain an illustrative quotation by Swift, you retrieve every entry that matches one of those criteria: 2500 results total

Example search with OR selected.

If you choose AND, the search looks for results that match both search terms. For example, if you search for words that Johnson considered “ludicrous” AND that contain an illustrative quotation by Swift, you retrieve only those entries that match both criteria: 9 results.

Example search with AND selected.

You can add additional criteria by pressing the + button. Press the - button to delete a row.

The search moves down the list, one criterion at a time, in the order that the search terms appear.

Currently the search does not provide a way to group these criteria so that the steps will be performed in a different order.

To search for a foreign language in the dictionary, choose Foreign from the pull-down menu. A new pull-down menu will appear in the search field; choose the language you’re seeking. 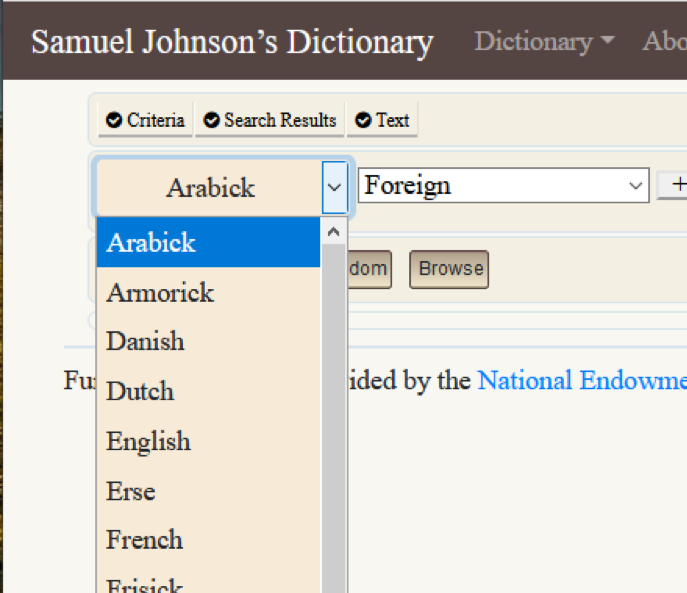 Example search with AND selected.

Here are Johnson’s language names that may be unfamiliar to modern readers, followed by modern names:


Johnson referred to a handful of other languages that are not represented in the pull-down list because they occur so rarely in the dictionary:

The science of etymology has advanced since the eighteenth century, so Johnson’s conclusions about languages and word origins may not match modern understandings.

Example search with Text only.

Example search with all display options.

Searching in an eighteenth-century text can be challenging for several reasons:

If your search isn’t finding a particular word or name, try searching for part of the word and use a wildcard, rather than searching for the entire thing. For example,

For names, try searching for last name only, using all lower-case letters, and putting an asterisk at the end, e.g. smith* (to find Smith or Smith's).

For books of the Bible, search for the name of the specific book (e.g., Job) rather than for Bible.

For entries that begin with to or an or the, omit the determiner or particle. For example, to find to pen, search for pen.

We are actively working to improve searching in the dictionary. If you have trouble with a search, please let us know by clicking the “Feedback” tab on the right side of the screen.

Sometimes your search might retrieve words that you do not expect. Usually this happens because there is a second headword, a synonym, or an alternate spelling in the result that does match your search.

We are still actively improving the search functions! Please let us know if your search retrieves something unexpected and you can’t figure out why. You can click the “Feedback” button on the right side of the page (circled in red in image above).