How did a graduate student studying German literature end up initiating the internet digitization of Samuel Johnson’s brilliant dictionary? The genesis starts early, but not with Johnson. I have always had a great love of reference works. I taught myself to read as a preschooler and eagerly devoured the few books in our house, which primarily consisted of my grandfather’s 1973 set of World Book and Childcraft encyclopedias. When my parents took my sisters and me to Disney World, my chosen souvenir was a Disney-themed children’s dictionary, which presented all of the definitions in rhyme. I was also an early child of the internet; my middle school went online in 1994, and we were all given email accounts and weekly access to the world wide web. I took the opportunity to teach myself HTML and put it into practice with a GeoCities website about unicorns and fantasy novels. In high school, I joined the school’s technology program and expanded my knowledge base to include CSS, PHP, mySQL, and various other tools for creating database-driven websites.


I met Johnson and his dictionary for the first time in a humanities survey course, after deciding, due to scheduling conflicts, to focus on German and English at the expense of Computer Science. The Longman Anthology of British Literature, our text for the class, featured some entries from the dictionary, emphasizing those, like oats and lexicographer, with humorous definitions. I encountered him again as I read popular non-fiction books on famous lexicographers (including Jack Lynch’s The Lexicographer’s Dilemma), and, after enjoying a number of abridged collections of the dictionary entries, I determined that I wanted to look at the full work myself. There was just one issue: I couldn’t afford a facsimile and, despite being a work in the public domain, there were no publicly accessible, good-quality copies of the dictionary online. I found a rather costly CD-ROM edition which required Windows 3.1 or OS Classic to run, but it was not really suitable for long reading sessions or random browsing. Database subscriptions through the university library led to page scans of inconsistent quality. I knew that Johnson’s Dictionary was something that needed to be on the internet, free and searchable, and so, busy as I was with my German graduate work, I decided to undertake the mission myself.


I purchased the domain, johnsonsdictionaryonline.com, on November 26, 2010. Eager to start transcribing, I didn’t want to spend too much time developing the backend, so I installed WordPress and then modified it to suit my needs. Using an online copy of the dictionary from the British Library, accessible only through my university library’s digital subscriptions, I started transcribing the dictionary alphabetically. This did not last long; I soon began jumping around for variety. I also started transcribing words requested by others; the first request I received came in January 2011 from a graduate student at the Univerzita Karlova in Prague who wanted “ambition” for his dissertation. He had experienced the same frustration: the only online version of the dictionary he could easily access was a non-OCRed scan of the third edition. Most of the requests I received tended to be for scholarly, literary, or legal (particularly constitutional) inquiries. 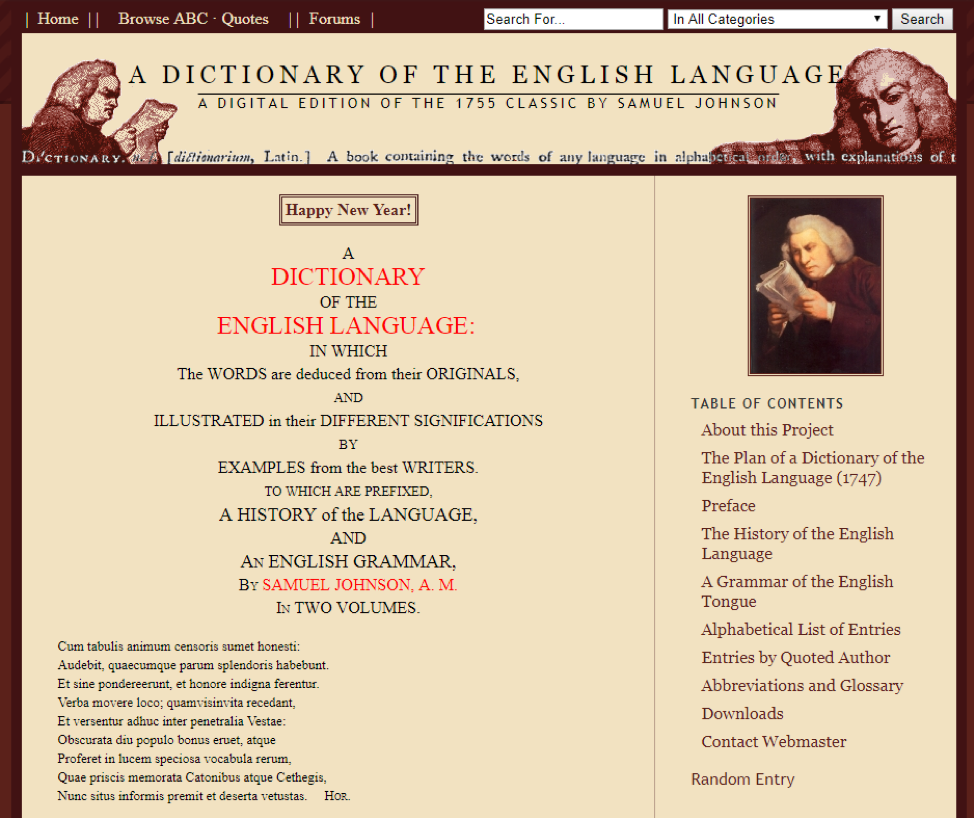 
Occasionally, though, I got other sorts of questions. I was asked how much the two folios weighed, and this prompted me to add additional pages to the website: an about page, a history page, and frequently asked questions (which answered the question of weight by quoting both Paul Groves and Henry Hitchings: about twenty pounds). My additional pages were soon filled in with a great miscellany, including a guide to Greek and Anglo-Saxon ligatures, and information about the random-seeming numerals that appear at the bottom of the dictionary pages (“press figures”). This was followed by other requested features, such as the entry annotations, links to other dictionaries, and citation guides. 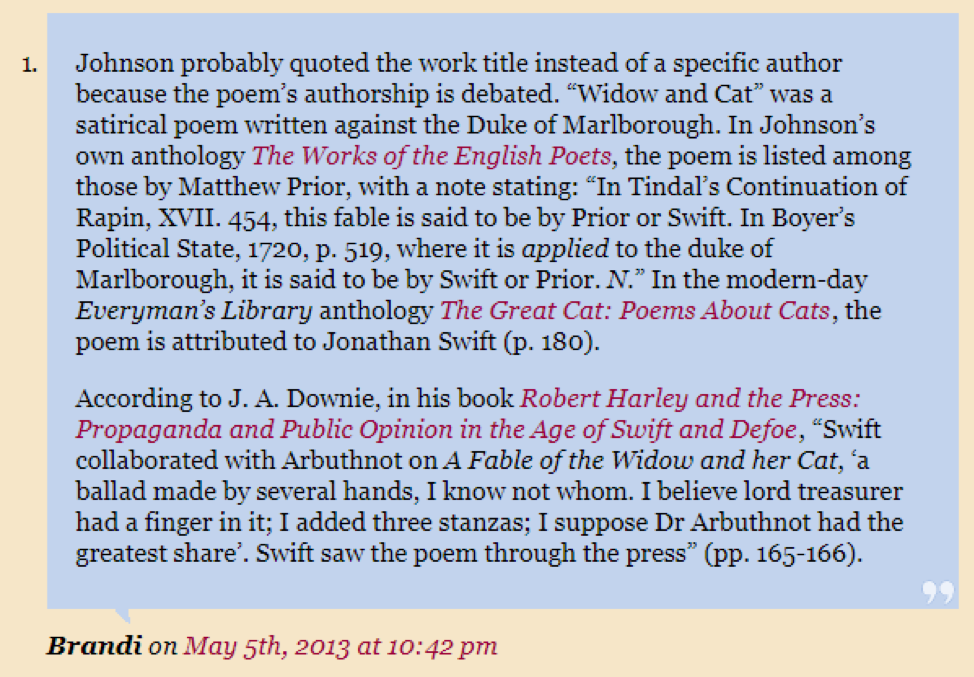 Annotating was probably my favorite thing to do (sample from “perfidious”).


I presented my fledgling progress at the Washington University Graduate Student Symposium in February 2011. My presentation focused on how data analysis could be used to evaluate the dictionary from a statistical perspective. Johnson states in his “Preface” that he considered Philip Sidney the chronological starting point for sourcing his quotes, and that Johnson would generally not include any “living authours.” Using author tags that I had applied to the entries as I transcribed them, and mapping the birth and death years for each author, I wanted to see what the actual spread of the dictionary’s authorities looked like on a timeline (and to see how many contemporaries – including himself – did make it in). I was also curious to see what genre made up the bulk of the sources quoted, which of Shakespeare’s plays provided the most quotes, etc. In short, I wanted to see what sorts of things Johnson’s brain latched onto – to see what influenced his perception of the English language. The poster I presented (and its irreverent tagline: “The Big Johnson Project”) scored third place in the humanities competition. 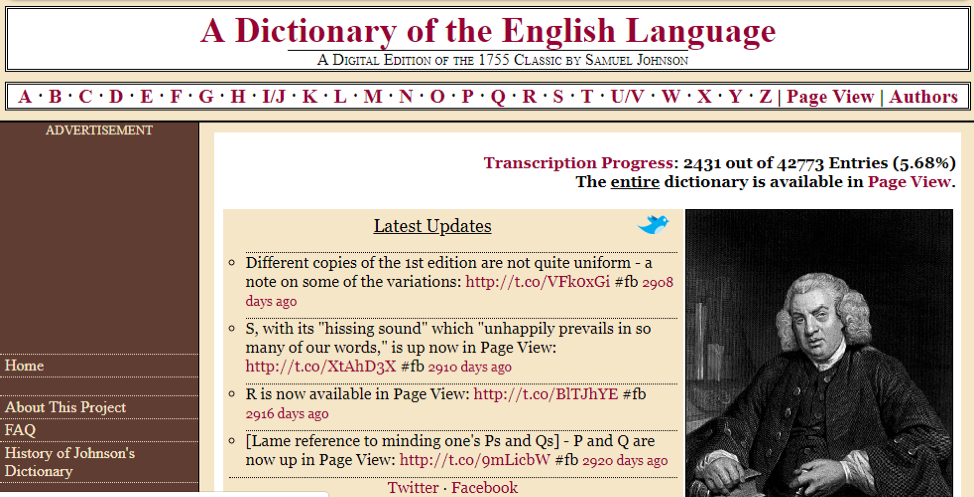 
By Spring 2011, I realized that it would take a long time to transcribe the entire dictionary, so I decided to add high-quality scans to the site. Over the summer, I checked out a true-to-size facsimile of the dictionary, lugged it to the digital humanities lab at Washington University in St. Louis, and spent a couple of weeks scanning it one page at a time on the largest flatbed scanner available. I put the pages on the website and added tags to the entries to link them to the appropriate page – this way, even at my turtle pace, anyone could look up whatever word they needed. Around August 2011, I began to get messages from people who wanted to assist with either transcribing or editing entries. The number of volunteers gradually grew to be around a dozen or so at any given time, and I started maintaining a shared Google spreadsheet to divvy up the work. Dave Green, an early volunteer, created a Windows application to help format transcriptions (thank you!), and others offered valuable input with regards to formatting. 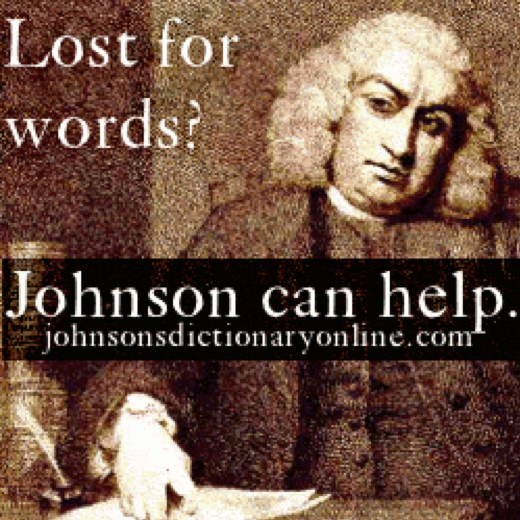 
By January of 2014, a number of university professors were having their students transcribe entries; one of these was Beth Young, who transcribed her first words in March of that same year. I had just embarked on starting a complete rewrite of the site from scratch – no more WordPress base! – because I wanted to improve on the search capabilities and entry tagging. However, life got in the way, causing me to indefinitely pause both my studies in German and my work digitizing Johnson.


I was afraid that the project would remain stuck, just shy of being 10% transcribed, but Dr. Young offered, in May of 2016, to have the project taken in by the University of Central Florida’s Center for Humanities & Digital Research. I took her up on her offer and I’m beyond thrilled that, thanks to the NEH Grant she was able to secure, the project will be completed (and made much better looking!) and expanded to include the much-requested 4th edition. Above all, it will remain freely accessible. I wish to thank Dr. Young and to thank the countless volunteers who assisted the project from its infancy – thank you all so very much for bringing my favorite harmless drudge into the 21st century.